1. DESIGN OF RADIANT HEATERS AND OVENS

Many industrial processes, such as in the metallurgy field and the rapid thermal asfafadfad processing of silicon wafers, require controlled heating of materials, as has been described by Choi and Do (2001), Huang et al. (2000), and Balakrishnan and Edgar (2000). Regarding the material temperature, such processes require not only uniformity, but also that it follows a specified time-dependent curve. This can be achieved only by means of a carefully controlled heat flux on the surface of the processed material, as defined by the energy balance; so, in fact both the temperature and heat flux are imposed. The thermal designer aims at finding the thermal conditions of the system such that these two conditions are satisfied.

In the inverse design approach, the conditions in the unconstrained elements are found directly from the two specifications on the design surface, avoiding the trial and error procedure of the forward design. The mathematical model allows the prescription of two conditions in some boundaries, while other boundaries are left unconstrained. For problems that involve thermal radiation heat transfer, this type of formulation is described by a Fredholm integral equation of the first kind, known to result in ill-posed problems that can be solved only by means of regularization methods (Hansen, 1990). A comprehensive review of steady state inverse design can be found in França et al. (2002).

Examples of the application of the inverse design to transient heating processes can be found in Daun et al. (2004, 2006), Ertürk et al. (2002), França (2003), and França and Howell (2006). Figure 1 presents a schematic view of a 3D radiative enclosure, formed by gray-diffuse surfaces, that was solved in França and Howell (2006). The space inside the enclosure is filled with a transparent medium, so energy is transported solely by thermal radiation exchange among the surfaces. The design surface and the heater are located at the bottom and top of the enclosure. The remainder of the enclosure is formed by walls that are isolated, albeit not ideally, from the outside. The length, width, and height of the enclosure are L, W, and H.

Figure 1. Schematic of the radiative enclosure (França and Howell, 2006).

It was imposed that each design surface element jd has imposed on it a heating history of the following type:

The first term on the right-hand side of Eq. (2) accounts for the net radiative heat transfer exchanged with the other enclosure surfaces. The negative sign arises from the convention that radiative heat out of the surface is positive. The second term accounts for heat losses to the outside, at the temperature t0, where R is the equivalent thermal resistance.

Despite the simplifications that are inherent in the derivation of Eqs. (1) and (2), they make a simple demonstration of how two conditions are actually imposed on the design surface when a temperature history is specified. The powers in the heaters are required to be found to satisfy both conditions. This problem was solved in França and Howell (2006) using the truncated singular value decomposition (TSVD) regularization, since the system of equations resulting from the radiative analysis of the enclosure was ill conditioned. Figures 2a-2c show the net heat flux (and, therefore, the total heating power) required on the heating elements covering the entire extension of the top surface for different levels of regularization: p = 4, 6, and 8. The results are presented from the beginning of the heating process, since the heating requires adjustment with time to satisfy the heating history. 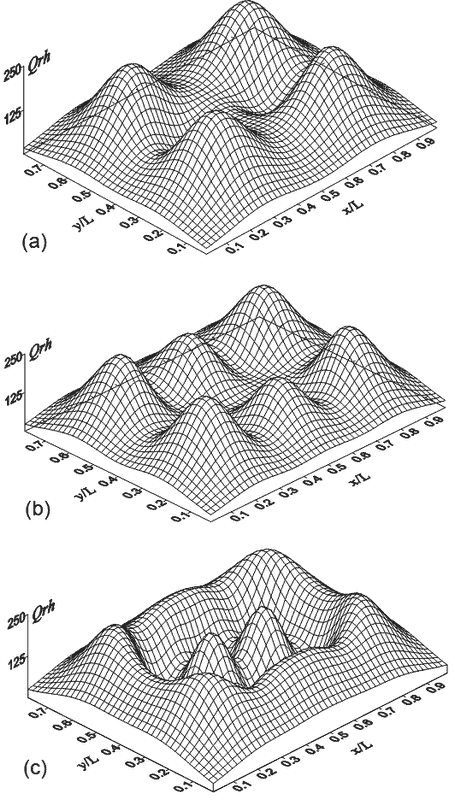 The application of the regularization inevitably introduces an error to the solution, since only the first p terms are kept in the terms that form the canonical singular value decomposition (SVD) decomposition of the system of equations. The accuracy of the solution can be assessed by comparing both the heat flux and the temperature obtained from the inverse solution with the prescribed values for the temperature and heat flux, Eqs. (1) and (2),

Both errors were computed for the three regularizations (p = 4, 6, and 8) for different instants of time, and they are presented in Fig. 3. As expected, the results show that the smaller the regularization parameter p, the larger were the errors for the heat flux and temperature distributions on the design surface. The error in the heat flux was maximal in the beginning of the process, decreased steadily up to τ

1.0, and then showed a slight increase with time. The error in the temperature, on the other hand, started with a smaller value than that of the heat flux, increased to a maximum for a time less than τ = 0.5, and then remained nearly constant with time.

Figure 3. Maximum errors of the inverse solution during the heating process for different regularization parameters; p = 4, 6, and 8 (França and Howell, 2006).

For the thermal process, it is the error in the temperature that matters the most, since it is the temperature history that is in fact imposed on the design surface; the heat flux is only the means for it to occur. Comparing the three solutions, for p = 4, 6, and 8, if a maximum error of 1.0% is imposed to the temperature, then the solution for p = 4 is not satisfactory. The solution for p = 8 presents the smallest error, but it was observed that, for more advanced times, it led to negative heat fluxes in some elements of the heater elements, which is not a practical solution. The solution for p = 6 satisfied the criterion of 1% and remained positive at all times, and so satisfied the criteria of accuracy and practicality.

In the previous example, the heat transfer was considered to be dominated by thermal radiation. The problem is so formulated by a system of linear equations, albeit ill conditioned. In many industrial ovens and furnaces, the heat transfer combines radiation and convection, and so the inverse problem is formulated by an ill-conditioned system of nonlinear equations. Inverse design considering combined heat transfer has been presented in França et al. (2001) and Mossi et al. (2008) considering laminar and turbulent fluid flow, respectively. One general schematic of the systems considered in Mossi et al. (2008) is shown in Fig. 4, which shows a 2D enclosure in which the design surface and the heaters are located on the bottom and top surfaces, respectively. In the problem, the temperature and the heat flux are imposed on the design surface, and the power input in the heating elements is sought to attain the specifications. The fan is located in the centerline of the enclosure, and the generated forced flow makes convective heat transfer a relevant mechanism in the inverse analysis.

Therefore, the radiative heat flux on the design surface is no longer the same as the total heat flux. In fact, both the radiative and the convective heat fluxes are unknown, and need to be found from the solution of the governing equations. As presented in Mossi et al. (2008), an iterative solution was established in which the problem was initially solved considering purely radiative heat transfer, and then convective heat transfer was incorporated from temperature fields obtained in previous calculation steps. This form of linearization of the problem has been commonly applied in forward formulations. As shown in this study, although the formulation of the inverse problem in terms of the radiative terms leads to an ill-conditioned system of equations, its regularization allows convergence of the convective terms, despite the notorious difficulty to converge combined radiation and turbulent convective heat transfer.

Figure 5 shows one solution for the dimensionless heating input on the heaters to attain the desired temperature and heat flux on the design surface. As seen in this figure, the total power, a combination of the radiative and convective heat fluxes, is positive for all elements, a solution that can be achieved for intense regularization of the system of equations. Of the 50 terms that form the canonical SVD of the system of equations, only p = 2 terms were retained to achieve an entirely positive heat input; otherwise, negative values appeared, which is not a practical solution. Figure 6 shows the resulting heat flux on the bottom surface. On the design surface, the total heat flux is close to the specified dimensionless value of -0.3, with average and maximum errors of 0.83% and 3.43%, respectively. The major contribution of the heat flux was due to thermal radiation, which in this case shows the maximum absolute value in the center of the design surface (x = 0). On the right sides of the heating elements and design surfaces, where are located adiabatic walls, the net heat flux is imposed to be zero, so the convective and radiative heat flux have the same magnitude, but opposite signals.