DEEP ABSORPTION OF A COLLIMATED RADIATION IN HIGHLY SCATTERING MEDIA

DEEP ABSORPTION OF A COLLIMATED RADIATION IN HIGHLY SCATTERING MEDIA

The propagation of radiation in an absorbing and scattering medium is one of the problems often encountered in the study of a variety of natural phenomena, as well as in diverse applications. As a rule, even in a relatively simple case—in which directed external radiation illuminates a homogeneous layer of medium—the absorption of radiation changes non-monotonically with the depth. In particular, this feature of radiative transfer in scattering media was considered in Dombrovsky (1996), Dombrovsky and Baillis (2010), and Modest and Mazumder (2021).

For the sake of clarity, some specific problems should be recalled. For example, in Vera and Bayazitoglu (2009) and Dombrovsky et al. (2013), their calculations showed that in laser-induced hyperthermia of superficial tumors the maximum tissue heating in the so-called therapeutic window usually occurred at a distance of several millimeters from the body surface. In the case of solar irradiation of a thick layer of snow, visible radiation can lead to maximum heating of the snow at a depth of tens of centimeters (Dombrovsky et al., 2019; Dombrovsky and Kokhanovsky, 2022). A similar effect occurs for densely packed semi-transparent spheres in advanced solar receivers (Avila-Marin et al., 2019; Sedighi et al., 2021).

In the aforementioned problems, as in many other cases, a formal numerical Monte Carlo solution is usually applied to obtain an exact solution (Avila-Marin et al., 2019). At the same time, a sufficiently accurate theoretical analysis can be performed based on an approximate analytical solution. This convenient and universal approach, as well as its main results, is briefly described in this article.

In the case of an isotropic medium, the radiative transfer equation (RTE) is as follows (Dombrovsky and Baillis, 2010; Howell et al., 2021; Modest and Mazumder, 2021):

In the case of relatively weak absorption of radiation and an optically thick layer of the medium, when there is multiple scattering it is sufficient to use the simplest transport model for single scattering (Dombrovsky, 2012, 2019):

Of course, the normalization condition \[\frac{1}{2}\! \int_{-1}^{1}\Phi_{\lambda } (\mu_{0})d\mu_{0} =1\] is satisfied by function (2). The transport model has been proven to be sufficiently accurate for many radiative transfer problems in weakly absorbing and strongly scattering media (Dombrovsky and Baillis, 2010; Dombrovsky and Lipiński, 2010). Interestingly, the computational results obtained using the transport model are normally very close to those obtained with the more complex Henyey–Greenstein analytical model (Dombrovsky et al., 2011, 2013).

The transport form of the RTE is similar to that for hypothetical isotropic scattering, which follows from Eqs. (1)–(3):

where \(G_{\lambda }\) is the irradiance and the modified coefficients are the following:

Consider a semi-infinite plane-parallel layer of a scattering medium illuminated directly by collimated radiation. In the case of oblique incidence, the radiation field in the medium is three-dimensional (3D). Fortunately, the 3D problem can be radically simplified. Let us note that the irradiance field in the medium at illumination and the same angle relative to the normal to the surface, but at different azimuthal angles, differs only in the rotation relative to the normal. As a result, the irradiance field is the same as in the case of uniform radiation along a conical surface. This cone with a vertical axis is formed by solar rays with the same zenith angle. Hence, we can solve the equivalent axisymmetric problem. The axial symmetry allows us to integrate the RTE over the azimuthal angle. For the direct incident radiation of the unit intensity, we have the following equations:

The radiative transfer problem for the diffuse radiation component can be written as follows:


This problem can be further simplified because the source function in Eq. (9a) is independent of the value of \(\mu\) and the two-flux (Schwarzschild–Schuster) model is applicable. The detailed analysis of this model in Dombrovsky and Baillis (2010) showed its sufficiently high accuracy.

The two-flux method uses the following approximation of the diffuse radiation intensity:

Obviously, the deepest penetration of the collimated radiation into the medium takes place at the normal incidence (\(\mu_{i}=\) 1) when Eq. (13) gives \(\xi_{\lambda }=\) 1 and \(\omega_{\lambda }^{\rm tr} =\) 0.75. The large boundary value of the transport albedo shows that the internal maximum value of absorption only takes place in highly scattering media. The results of the calculations in the most interesting range of 0 \(\lt \theta_{i}\lt\) 45° are presented in Fig. 1, where the curve \(\omega_{\lambda }^{\rm tr} (\theta_{i})\) separates the regions corresponding to the absorption maximum directly at and below the surface of the irradiated medium. Interestingly, the absorption maximum can only be at a distance from the irradiated surface when the angle of incidence is less than 60°, even in the case of a weakly scattering medium. 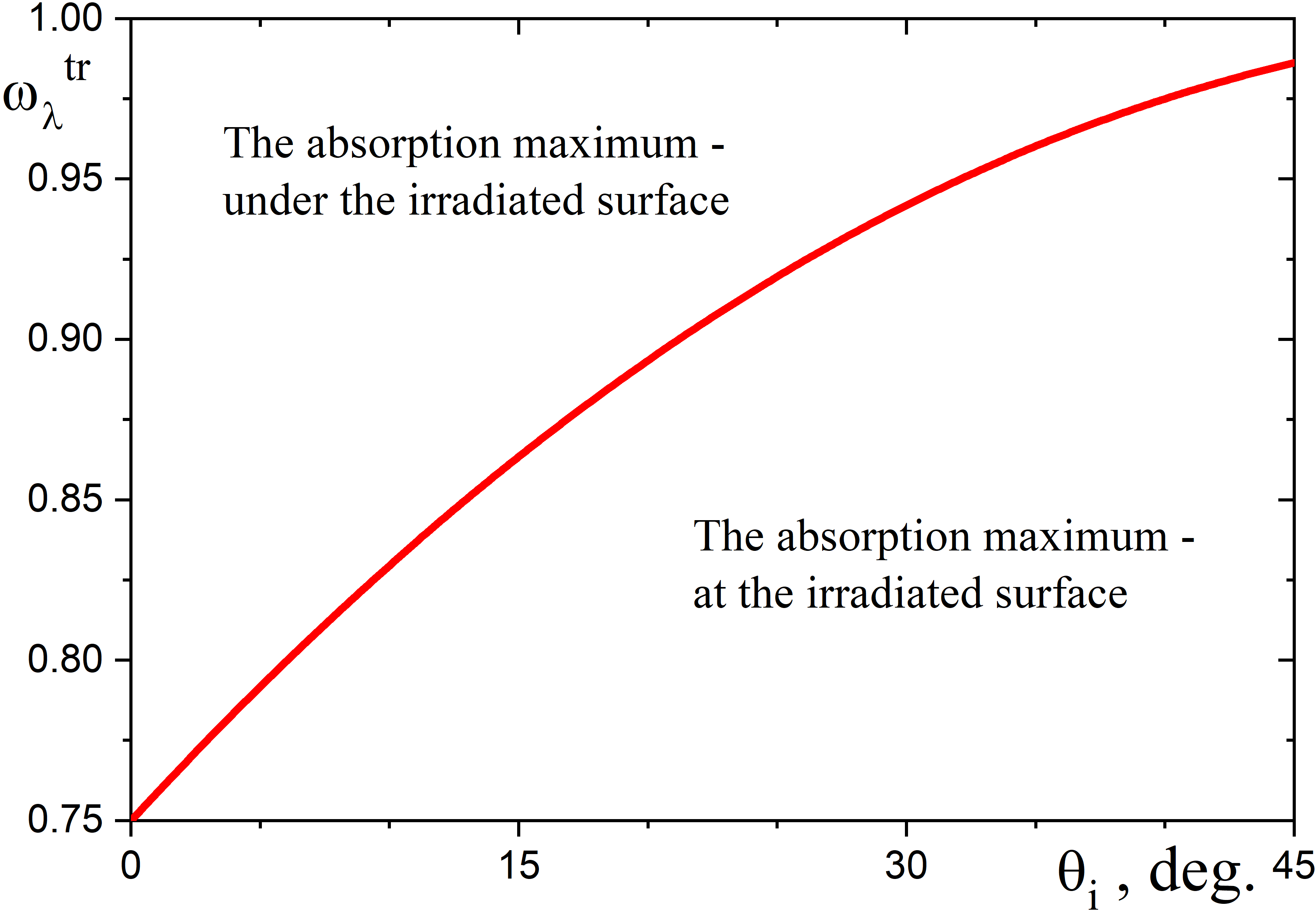 It is also interesting to calculate the ratio of the maximum local absorption of radiation to that on the surface of the medium illuminated along the normal:

Figure 2 shows the increase in the optical depth \(\tau_{\lambda ,\max }^{\rm tr}\), where the absorption maximum is located, as well as the relative \(\bar{p}_{\max }\) value of this maximum for media with high values of the transport albedo of single scattering \(\omega_{\lambda }^{\rm tr}\). It can be seen that the effect of deep absorption of radiation is most pronounced for media at \(\omega_{\lambda }^{\rm tr} >\) 0.99. For example, when \(\omega_{\lambda }^{\rm tr} =\) 0.9999, the absorption maximum is at optical depth \(\tau_{\lambda ,\max }^{\rm tr} =\) 3.23 and its relative value is \(\bar{p}_{\max } =\) 1.85. This seemingly exotic situation takes place for pure snow in the visible part of the solar spectrum. Against this background, the application of Bouguer’s law in some publications on radiation propagation in scattering and weakly absorbing media looks especially inappropriate.

Figure 2. Location (a) and magnitude (b) of the maximum absorption of collimated radiation in a scattering and weakly absorbing medium 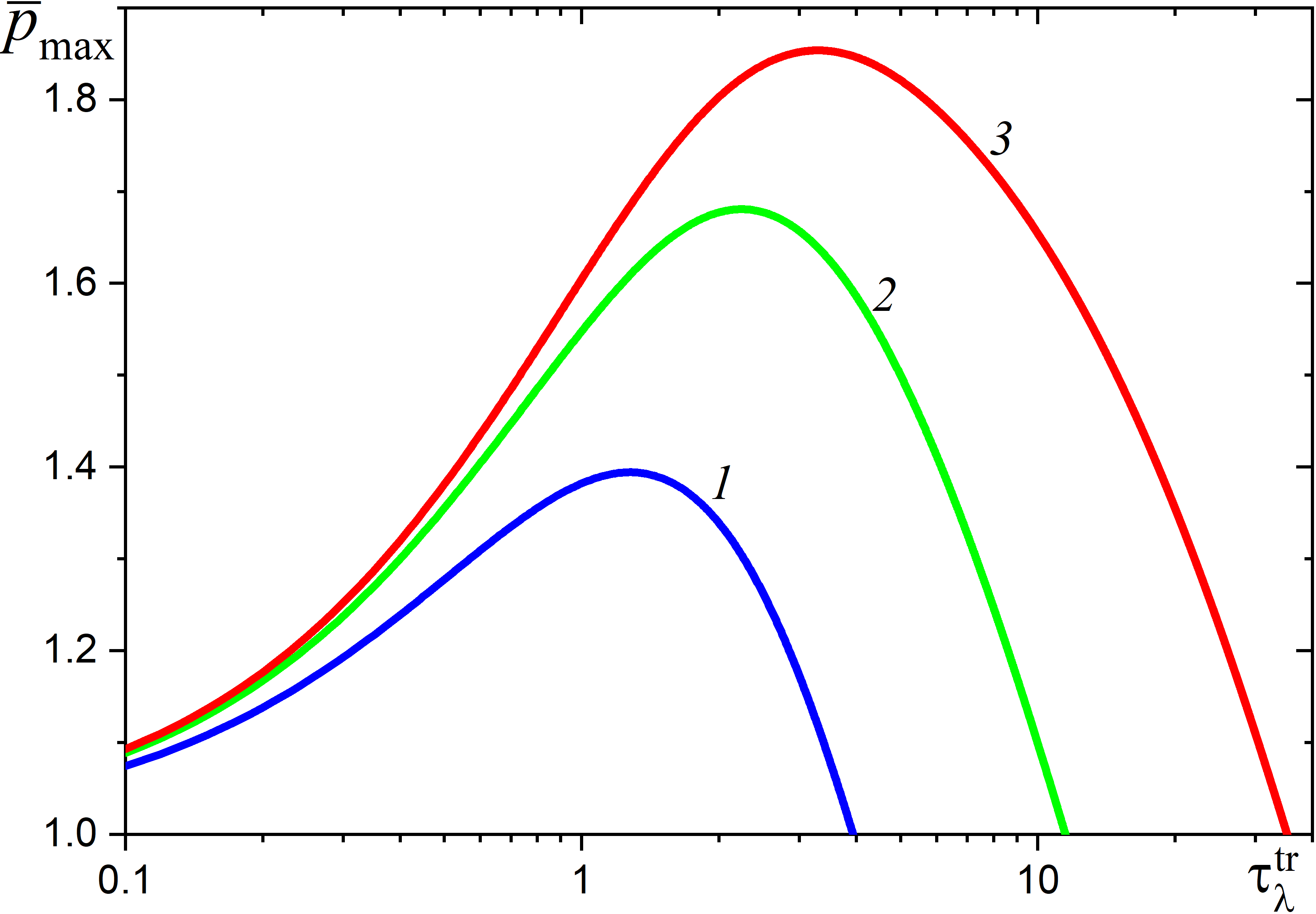 It should be noted that a similar analysis can also be performed in the more general case of a refracting host medium; for example, in the case of so-called cloudy ice containing numerous ice gas bubbles (Dombrovsky and Kokhanovsky, 2020). For this purpose, one should use the modified two-flux approximation developed by Dombrovsky et al. (2006).