The process of evaporation is used widely in the chemical and process industry, and for a variety of purposes. These include the concentration of solutions (often as a precursor to crystallization of the solute), revaporization of liquefied gases, refrigeration applications (cooling or chilling), and generation of pure and mixed vapors for process applications. The term evaporators is usually reserved vapors for the first of these applications, namely the evaporation of the solvent from a solution in order to concentrate the solution. Evaporators may be classified into falling film evaporators (in which evaporation takes place from the film interface with no nucleate boiling at the wall), nucleate boiling evaporators (in which wall nucleate boiling occurs over part or all of the heat transfer surface), flash evaporators and direct contact evaporators.

The process of falling film evaporation is illustrated schematically in Figure 1. A liquid film falls down the channel wall and evaporates, with the vapor either flowing co-currently with the film ( Figure 1 (a)) or countercurrent to it ( Figure 1 (b)). Heat transfer in such systems is discussed in the article on Falling Film Heat Transfer. If countercurrent flow is used, then there is a limit on the vapor velocity which can be generated before the liquid begins to be carried upwards (see article on Flooding and Flow Reversal). In falling film evaporators, evaporation occurs directly at the liquid-vapor interface with no nucleate boiling at the wall; this means that lower temperature driving forces can be used and that the extensive fouling often associated with nucleate boiling of crystallizing solutions is avoided. Falling film evaporators can take a number of different forms; an evaporator in which evaporation occurs on the inside of vertical tubes is shown in Figure 2. Note that particular care has to be taken to ensure uniform distribution of the liquid at the top of the tubes. In other forms of falling film evaporators, the liquid film may fall over banks of horizontal tubes, over plates and over coils.

In evaporators with nucleate boiling, vapor generation is initiated by wall nucleation (though in much of the evaporator, nucleation may be supressed). Such evaporators are really a subclass of boiling systems in general, and the heat transfer processes are those described in the article on Forced Convection Boiling. The types of evaporators in this category include: 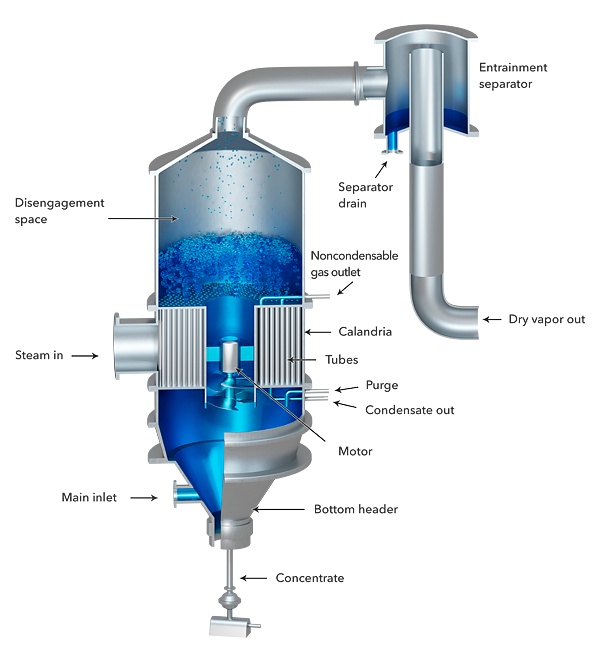 In flash evaporation, the liquid is preheated at pressure and then flashed through a restriction into a vessel at lower pressure where vapor is formed in the process of restoring the liquid to its saturation temperature. Perhaps the best known case of flash evaporation is that used in seawater desalination plants, where salt water is evaporated to produce distilled water in a series of stages at different temperatures as illustrated schematically in Figure 4. (See also Desalination.)

In this type of evaporator, a hot gas is injected into a pool of liquid and causes it to evaporate, the vapor being carried away with the efflux gas. Such evaporators are relatively cheap and useful for the concentration of corrosive fluids, viscous liquids and slurries which may be difficult to handle in more conventional heat exchanger. A convenient way of providing the hot gas is to use a submerged combustion system in which the hot gas is produced in situ by the combustion of gas or fuel oil in a combustion chamber mounted in the center of the vessel containing the liquid. (See also Direct Contact Heat Exchangers.)

In the Heat Exchanger Design Handbook (HEDH) there is more information on this topic. These entries are found in the links below: