The discrete ordinates method (DOM) and the finite volume method (FVM) have been widely applied in the last two decades to the solution of radiative heat transfer problems, owing to their good compromise between accuracy, flexibility, and moderate computational requirements. They can be applied to nonisothermal, nonhomogeneous, anisotropically scattering, and nongray media in complex geometries. However, several limitations of these methods have also been identified. Among them, ray effects and false scattering are perhaps the two most important ones. These two problems have been discussed, e.g., in Chai et al. (1993), Raithby (1999), and Coelho (2002a), and several proposals have been made to overcome them.

A simple example taken from Coelho (2002b) is given here to illustrate false scattering. Let us consider a 2D square enclosure of unity side (L = 1) containing a transparent medium and bounded by black walls. The blackbody radiation intensity is equal to one at the left side wall and equal to zero at the other walls. A single direction of propagation of radiation intensity, making an angle of 45 deg with the x and y coordinates axes, and a uniform grid with 11 × 11 control volumes are considered. The exact solution is equal to one for x < y, equal to zero for x > y, and exhibits a discontinuity for x = y. The numerical solution calculated using the DOM and the step scheme shows that the predicted radiation intensity field for the direction under consideration is strongly smoothed, as if a diffusion phenomenon were present [see Fig. 1(a)].

Figure 1. Radiation intensity field in a square enclosure with a transparent medium — the direction of propagation makes an angle of 45 deg with the coordinate axis: (a) step scheme; (b) SMART scheme.

False scattering may be reduced by refining the grid or by using more accurate spatial discretization schemes. The diamond scheme is not a remedy. This scheme is prone to nonphysical oscillations and unrealistic negative radiation intensities, even though it may reduce the magnitude of false scattering. However, there are many high-order resolution schemes that significantly reduce false scattering, such as the second- or third-order accurate schemes that satisfy the boundedness criteria of the normalized variable diagram, the total variation diminishing schemes, the essentially nonoscillatory schemes, and the genuinely multidimensional schemes (see the article “Spatial discretization schemes”).

Figure 1(b) shows the significant reduction of false scattering, for the example given above, when the high-order resolution SMART scheme is used (see Coelho, 2002b, for details). The performance of several other high-order schemes is illustrated in Fig. 2, which refers to the same example, but for a finer mesh with 25 × 25 control volumes. This figure shows the radiation intensity profile at x/L = 0.5 for two different values of the direction of propagation, namely, for angles α = 45 deg and 30 deg between that direction and the x-axis (see Coelho, 2008, for details). The solution error is much larger for the STEP scheme than for all other schemes. The numerical smearing is particularly large when the direction of propagation makes an angle of 45 deg with the grid lines, but remains quite large for α = 30 deg.

An example based on the work of Ramankutty and Crosbie (1997) is given here to illustrate ray effects. Let us consider a narrow rectangular enclosure with height H equal to 10 times the width L, and containing a transparent medium. A hot strip with length equal to half the width of the enclosure is placed at the center of the top wall. The remaining part of the boundary is cold. The walls are black. The incident heat flux along the bottom wall should be continuous, and decrease from the center to the corners of that wall. However, calculations performed using the DOM along with the step scheme, the S8 quadrature, and a uniform grid with 125 × 125 control volumes yield an incident heat flux at the bottom wall equal to zero. The reason for this behavior is that the radiation intensity field is represented by the radiation intensity along a finite number of directions. Since the enclosure is very narrow, the bottom wall may not receive any energy from the top wall, leading to unphysical results.

Although the medium has been assumed to be transparent in this example, ray effects are also present in the case of a participating medium, even though they are attenuated when the optical thickness of the medium increases. In fact, calculations performed for an emitting-absorbing medium in radiative equilibrium with an optical thickness of unity, based on the height of the enclosure, still predict zero heat flux at the bottom boundary. Interestingly, calculations performed using a coarse mesh with 5 × 5 control volumes predict a heat flux at the bottom boundary in fair agreement with the exact solution. The explanation for this behavior lies in the interaction between ray effects and false scattering, and is discussed in the following section.

Lathrop (1971) proposed several remedies to mitigate or eliminate ray effects in the solution of neutron transport problems. He concluded that the most promising remedy to mitigate ray effects is to use more directions, i.e., to refine the angular discretization. This is also valid for the RTE, but the ray effects are reduced slowly with angular refinement, particularly in the case of discontinuous boundary conditions. The choice of the selected directions may help to keep the total number of directions relatively small, but that choice is problem dependent. Several quadratures have been proposed aiming at the improvement of the solution accuracy, as discussed in the article “Angular discretization methods,” but in general this choice has a marginal impact on the mitigation of ray effects. Another method proposed to reduce ray effects is the introduction of coupling terms into the representation of the transport divergence operator. However, the discrete directions become coupled, and there is no a priori estimate of how much the ray effect is reduced.

A successful approach to mitigate ray effects is the modified DOM (Ramankutty and Crosbie, 1997), which is discussed in the article “Modified discrete ordinates and finite volume methods.” This approach has also been applied to the finite volume method. Lathrop (1971) also proposed a method to eliminate ray effects, based on the transformation of the discrete ordinates equations so that they are equivalent to spherical harmonic equations. This method has not been applied to radiative heat transfer problems.

Ray effects and false scattering are both present in the solution of radiative transfer problems using the DOM or the FVM, as shown in Chai et al. (1993). It turns out that these two error sources have opposite effects and tend to compensate each other, as discussed in Raithby (1999). False scattering tends to smooth the radiation intensity field, while ray effects tend to enhance discontinuities or gradients of the radiation intensity field.

An example of the interaction between ray effects and false scattering taken from Coelho (2002a) is presented here. A 2D square enclosure of side L and black walls is considered. The emissive power of the top boundary is equal to one, and the emissive power of the bottom and side boundaries is zero. The medium neither emits nor absorbs, but scatters isotropically, and is in radiative equilibrium. The optical thickness of the medium is equal to one. A quasi-exact solution of this problem is available (Crosbie and Schrenker, 1984), which is labeled as “exact” in Fig. 3. This figure shows the incident heat flux on the bottom boundary normalized by the emissive power of the top boundary. The calculations were carried out using the DOM. Only the results in the range 0.5 ≤ x/L ≤ 1.0 are shown for symmetry reasons. 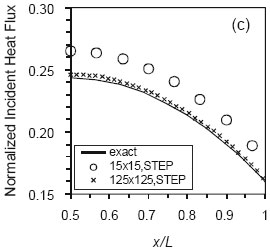 A relatively coarse grid with 15 × 15 control volumes, the step scheme, and the S8 quadrature yield reasonably accurate results, as shown in Fig. 3(a), but the maximum relative error exceeds 5%. If a more accurate spatial discretization is employed, either refining the grid or using the CLAM scheme, which is a high-resolution scheme (see the article “Spatial discretization schemes”), the solution error does not decrease, and an oscillatory solution is obtained. It is worth stressing that the CLAM scheme is bounded, as is the step scheme, and does not originate wiggles characteristic of unbounded spatial differencing schemes, such as the diamond scheme. The explanation for the observed deterioration of the solution accuracy is the following. The smooth and reasonable solution obtained using the coarse grid and the step scheme is due to compensation of the errors arising from false scattering and ray effects, which have an opposite effect and tend to compensate each other. The diffusive nature of the step scheme tends to smooth the radiation intensity field, while the ray effects tend to enhance discontinuities or gradients of the radiation intensity field. The grid refinement, as well as the use of a high-order accurate scheme, reduce the spatial discretization error, but have no influence on the error due to ray effects. The oscillatory solutions observed in Fig. 3(a) are due to ray effects, which are no longer compensated by spatial discretization errors. A finer angular discretization, such as the S16 quadrature, tends to reduce the ray effects. However, the results displayed in Fig. 3(b) reveal that ray effects are still significant.

Coelho, P. J., The Role of Ray Effects and False Scattering on the Accuracy of the Standard and Modified Discrete Ordinates Methods, J. Quant. Spectrosc. Radiat. Transfer, vol. 73, pp. 231−238, 2002a.