In the article “Mathematical Formulation”, the boundary condition of the radiative transfer equation (RTE) for an opaque surface that emits and reflects diffusely was given (Modest, 2003):

where wj is the quadrature weight of the jth direction, and M is the total number of discrete directions. In the FVM, the discrete form of Eq. (1) is expressed as

where Djcf is defined as

In general, in computational domains of complex shape, the walls are not aligned with the coordinate axes of a Cartesian reference frame. In such a case, body-fitted structured or unstructured meshes are often used, and control angles bisected by the walls are usually found, as illustrated in Fig. 1 for control angle Ωm. This means that s · nf > 0 for some directions and s · nf < 0 for other directions within the control angle. This situation, referred to as control angle overlap or control angle overhang in the FVM literature, is often ignored, and Eq. (3) is employed, yielding reasonable results for most practical problems (Chai et al., 1995, Murthy and Mathur, 1998, Liu et al., 2000). Nevertheless, a few methods to handle this situation are available, as briefly addressed below. 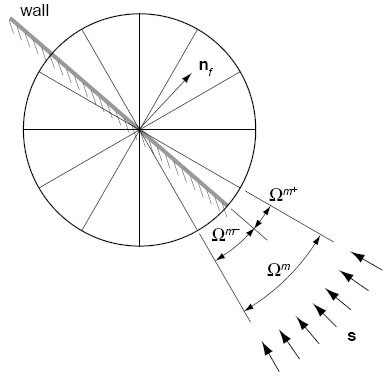 A sub-solid angle discretization, commonly referred to as pixelation, has been proposed by Murthy and Mathur (1998), and can handle control angle overhang in three-dimensional problems. In this method, the control angle that bisects the boundary is subdivided into smaller control angles (both the azimuthal and the polar angle are subdivided), also referred to as pixels. Then, the calculation of the irradiation is carried out by adding the contributions from all j sub-solid angles that satisfy the condition Djcf < 0. The remaining sub-solid angles are associated to outgoing directions and contribute to the radiative heat flux leaving the boundary.

Control angle overhang may be avoided if the direction of propagation of radiation intensity is defined in a local coordinate system. This option has not been used in the case of the FVM, but it was used by Vaillon et al. (1996) for the DOM, and applied in an orthogonal curvilinear coordinate system. A drawback of this approach is that the RTE includes additional angular redistribution terms that account for the variation of the polar and azimuthal angles with the spatial coordinates.

If the net heat flux, q′′w, defined as the difference between the emitted and the absorbed heat flux, is prescribed at an opaque surface that emits and reflects diffusely, the boundary condition is written as

The discretization of this equation for the DOM and FVM is straightforward.

In the case of an opaque surface that emits diffusely and has both diffuse and specular reflection components, the boundary condition is written as follows:

where ρd and ρs are the diffuse and specular reflectivity components of the boundary surface, respectively, and ss is the direction of the incoming radiation beam that is specularly reflected to direction s, which is given by

The boundary condition is discretized as follows for the DOM and FVM, respectively:

where ms denotes the direction of the incoming radiation beam that is specularly reflected to direction m at the wall. If the net heat flux is prescribed rather than the temperature of the wall, Eq. (5) remains valid.

In the case of a semitransparent wall there is external radiation penetrating into the physical domain, and the boundary condition is written as

where Iext denotes the external radiation intensity that penetrates into the domain along direction s, and ε the effective emissivity for the internal emission from the entire semitransparent wall thickness (Modest, 2003). If the wall is fully transparent, then ε = 0. The discretized boundary conditions for the DOM are FVM are given by equations similar to (8) and (9), respectively, except that the term Iext is added to the terms on the right side of those equations.

The computational domain should be selected in such a way that the open boundary is placed in a region of the physical domain where there is reliable information about the external radiative energy reaching that boundary, allowing the temperature of the blackbody to be defined. Liu et al. (2003) have shown that large errors may arise if the open boundary condition is placed in a region where there is no reliable information on the incoming radiative energy.

A symmetry plane behaves as a specular reflecting wall, and the boundary condition is written as

The discretized boundary conditions (8) and (9) still hold by setting ε = ρd = 0 and ρs = 1. If the symmetry plane is parallel to a coordinate axis of a Cartesian reference frame, then the direction ms defined by the unit vector ss belongs to the set of M discrete directions. Otherwise, the comments made for opaque, partially diffuse and partially specular walls concerning the calculation of the incoming radiation intensity in ss direction remain valid.

In the case of axisymmetric geometries, the boundary condition at the axis is written as

The boundary condition for a periodic boundary may be written as

where rw and rw* are the locations of points P and P*, respectively, which are periodically coincident, as illustrated in Fig. 2. In the case of translational symmetry, the normals to the periodic boundaries, nf and nf*, are coincident, as well as s and s*. In the case of rotational periodicity, nf* and s* are rotated relatively to nf and s, respectively, and control angle overhang is present. The control angle overhang is handled using the methods described above. Further details on periodic boundary conditions may be found in Mathur and Murthy (1999).

Other kinds of boundary conditions may be found, e.g., surfaces with directionally dependent radiative properties, but they are not so common, and will not be addressed here. In the case of combined heat transfer modes, the boundary conditions are written using the theory provided above together with Fourier´s law for heat conduction, and Newton´s law of cooling for convective heat transfer.