In this paper a simple kinetic model for calculation of the liquid droplet evaporation process is proposed. Results of the using kinetic model show that the calculation on the base of traditional diffusion approach can lead to large error of full droplet evaporation time, wherein the error increases with decreasing droplet size. It is often assumed that the heat supplied to an interface is entirely consumed for evaporation, while the formed vapor is removed from the evaporation surface via diffusion. However, the formation of this diffusion flux takes place at a distance of nearly some mean free paths of vapor molecules from the evaporation surface, i.e., in the Knudsen layer. In this layer, due to intermolecular collisions, the molecule–velocity distribution undergoes substantial changes, which are to be calculated by the methods of physical kinetics. The model presented in this paper takes into account the Knudsen layer near the vapor–liquid interface.

The process of evaporation of droplets into the surrounding gas is very important for various engineering applications and can be observed at different atmospheric phenomena (Sirignano, 1999; Kozyrev and Sitnikov, 2001; Dombrovsky et al., 2020a,b). The basic quantities to be considered are the time of complete evaporation of a liquid droplet and droplet temperature change during evaporation processes. In spite of the simplicity of the problem formulation, its solution in the general case encounters some difficulties (Kozyrev and Sitnikov, 2001). It is clear that the mass flux density value is needed for the complete evaporation time calculation. It is often assumed that the heat supplied to an interface is entirely consumed for evaporation, while the formed vapor is removed from the evaporation surface via diffusion. The droplet temperature is constant, in this case, during all evaporation processes. Such a situation can be implemented in practice. Figure 1 shows the experimental data (Borodulin et al., 2017) for the case \(R_0=\) 1.0 mm, \(\varphi_\infty=\) 27%, \(t_\infty=\) 27.5°C. As can seen from Fig. 1, there is a long time interval in which the droplet temperature remains almost constant (∼ 16°C) can be realized during evaporation process. For the Fig. 1, case, this time interval is ∼ 2006 s (from 134 to 2200 s). Quite often, this condition is used to determine the drop lifetime. 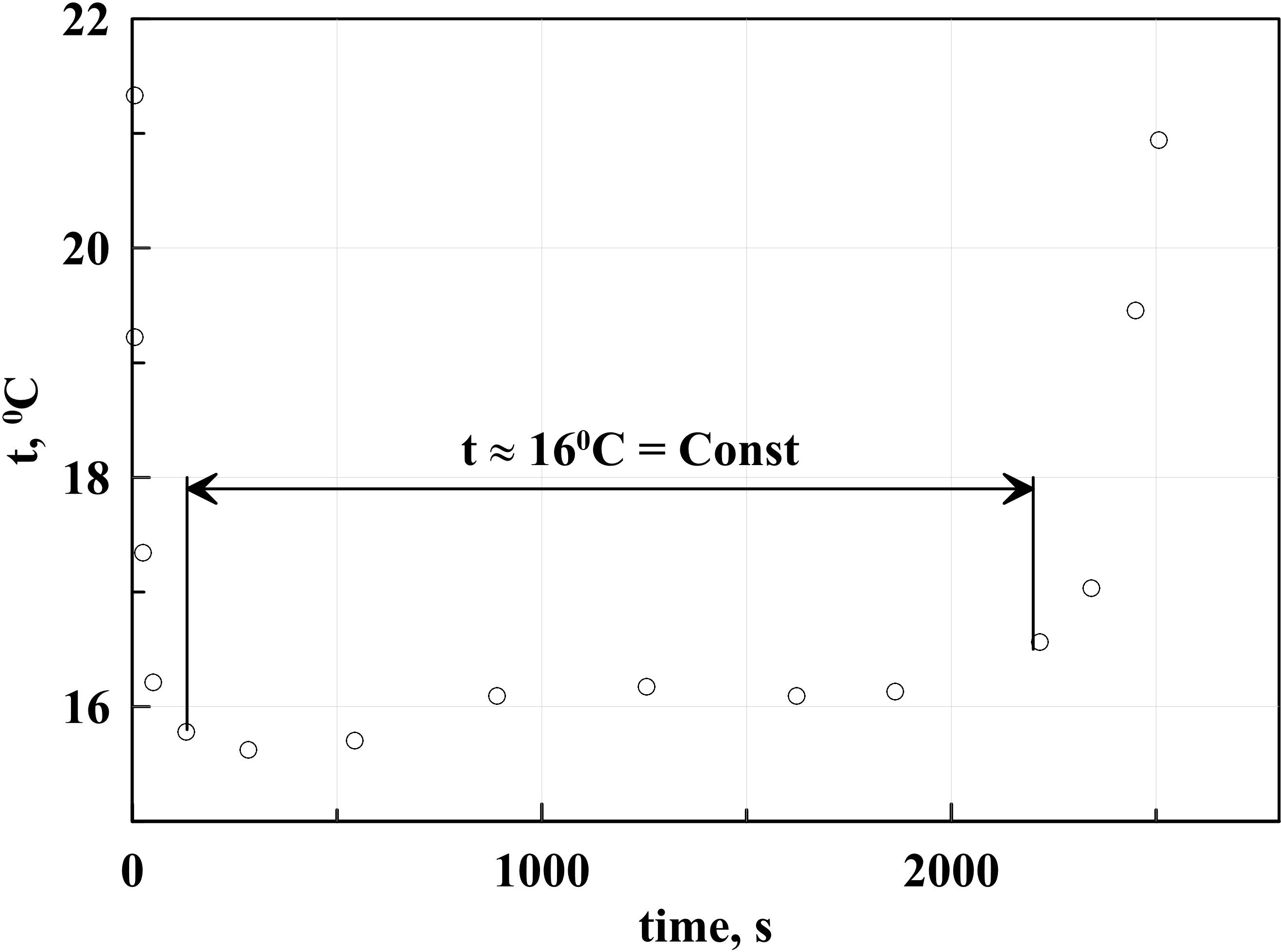 For the case when all the heat supplied to the drop is spent on evaporation and, as follows, droplet temperature does not change, the heat balance equation can be written in the following form:

where Nu is Nusselt number, \(\lambda\) is thermal conductivity of air, \(T_\infty\) and \(T_S\) are ambient air and droplet temperatures, respectively, \(j\) is mass flux dencity, \(r\) is specific heat of evaporation.

Droplet radius variation during the evaporation process may be found from the following correlation:

On the basis of (1) and (2), the expression for the lifetime of a drop of initial radius \(R_0\) can be obtained as follows:

In this case, the dependence of the droplet radius on time has the following form:

It is should be noted that Eqs. (3) and (4) were obtained with the assumption of the droplet temperature constant.

It is traditionally assumed that the heat supplied to an interface is entirely consumed for evaporation, while the formed vapor is removed from the evaporation surface via diffusion. However, it should be noted that the development of the diffusion flux takes place at a distance equal approximately to several mean free paths \(l\) of vapor molecules from the evaporation surface, i.e., in the Knudsen layer. In this layer, due to intermolecular collisions, the macroparameters undergo substantial changes and should be calculated on the basis of physical kinetics methods. The use of such an approach for studying evaporation of water droplets into a vapor–gas medium was shown in Levashov and Kryukov (2017). It should also be noted that the intensity of the evaporation–condensation processes and the character of the heat transfer between a droplet and an environment may be substantially affected by a noncondensable component of a gaseous medium. This effect was confirmed by experiments of Niknejad and Rose (1981) and Kosasie and Rose (1992), and calculations of Aoki (1998), Kryukov and Levashov (2008), and Levashov et al. (2018a,b).

In this paper, an approach that makes it possible to calculate the evolution of the droplet temperature and its lifetime, taking into account the presence of a Knudsen layer near the evaporation surface, was presented.

Let us consider a spherical liquid droplet with initial radius \(R_0\) placed into a gaseous mixture composed of the vapor of this liquid and a noncondensable component. At an initial moment, the temperatures of the droplet and the mixture are taken to be equal. It is assumed that the partial density of the vapor far from the droplet surface is constant and lower than the equilibrium value corresponding to the droplet surface temperature. In this particular case of water, this means that the humidity of the ambient medium is < 100%. Under these conditions, the droplet will evaporate, its temperature will decrease, and the heat transfer will begin from the ambient medium, which retains its higher temperature, to the droplet surface. The scheme of the problem is represented in Fig. 2. It is assumed that a thin layer (the Knudsen layer) is presented at a droplet surface. In this layer, the description is performed on the basis of the kinetic theory. Outside the Knudsen layer, the description can be carried out using the diffusion approach.

Figure 2. Schematic representation of the problem of droplet evaporation

where \(\gamma\) is a parameter that takes into account the possibility of heat supply to the droplet surface other than that due to the thermal conductivity. Further results were obtained for the case \(\gamma =\) 1.24 (Levashov and Kryukov, 2017). At first approximation, we believe the temperature gradient inside the droplet to be zero. In this case, the surface temperature may be determined at any time by the following heat balance equation, which takes into account the consumption of the heat supplied to the droplet for both its heating and evaporation:

Substance mass flux \(j\) in the Knudsen layer (kinetic flux) is often determined by the Hertz–Knudsen equation; however, this approach ignores (among other factors) the role of a noncondensable component. In this work, the role of this component is taken into account by introducing a special function \(f=f\left(\rho_v, \rho_{\text{mix}}, \boldsymbol{r}, T_s, \tau\right)\), which, in the general case, depends on the densities of the vapor \(\rho_v\) and the mixture \(\rho_{\text{mix}}\), distance from the evaporation surface \(\boldsymbol{r}\), and interface temperature \(T_s\). In this case, the equation for mass flux density is as follows:

Vapor molecules are assumed to be removed from the external boundary of the Knudsen layer due to diffusion (diffusion flux). In this case, the mass flux from the unit surface area per unit time may be determined from the following expression (Isachenko, 1997):

where \(D\) is the diffusion coefficient; \(P_\infty\) and \(T_\infty\) are the pressure and temperature of the mixture far from the droplet surface, respectively; \(T_s\) is the droplet temperature; \(\varphi_\infty\) is the air humidity far from the evaporation surface; \(R_{\text{mix}}\) is the individual gas constant of the vapor–gas mixture; \(\mu_{\text{H2O}}\) and \(\mu_{\text{mix}}\) are the molar masses of water and the vapor–gas mixture, respectively; and \(P_s(T_s)\) is the saturation pressure of water vapor at temperature \(T_s\).

The value of \(\varphi_k\) is determined from the condition of the equality between the diffusion (8) and kinetic fluxes (7). Thus, the temperature and radius of the droplet have been calculated at the current time step using Eqs. (6) and (2), respectively. The value of \(\gamma\) is the applied constant and equal to 1.24, in accordance with the approach of Levashov and Kryukov (2017). As noted, the noncondensable component has strongly influenced the evaporation process intensity.

As shows in Levashov and Kryukov (2017), the value of \(f=\) 0.002 makes it possible to obtain a satisfactory agreement between the time dependencies of the drop radius and temperature changes and the measurement results for the experimental conditions (Borodulin et al., 2017). Namely in this case, it is assumed that the value \(f= {\rm const}\) and does not depend on the change in the amount of the noncondensable component in the Knudsen layer. In the general case, the solution of the system of the Boltzmann kinetic equations for vapor–gas mixture (Kogan, 1969) can be used for this value determination. Some solution results are presented, for example, in Kryukov (2009). The results of kinetic calculations for different ratios between the concentrations of the noncondensable compoent (\(n_g\)) and the vapor (\(n_v\)) gives the possibilities to obtain an approximation for the mass flux density value for different \(n_g/n_v\) values [Correlation (9) was obtained for cases when 60 \(>n_g/n_v>\) 30.]

Thus, the following approaches to describing the process of evaporation of a drop placed in ambient air are possible:

The approaches (3) and (4) take into account the change in macro parameters in the Knudsen layer.

In this paper, we present the results of a simply kinetic approach application [approach (3)] to describe the process of evaporation of a water droplet of a different initial radius. The initial humidity of air is also varied. It is shown that the use of the traditional approach can lead to significant errors in the calculation of the droplet lifetime. The result of calculations gives the possibilities to obtain an initial droplet radius at which the results of simple kinetic and traditional approaches are the same. This radius is called the critical radius (see Fig. 8). Calculation results show that, for drops whose size is less than the critical value, the error in calculating the lifetime of drops can reach 80%. 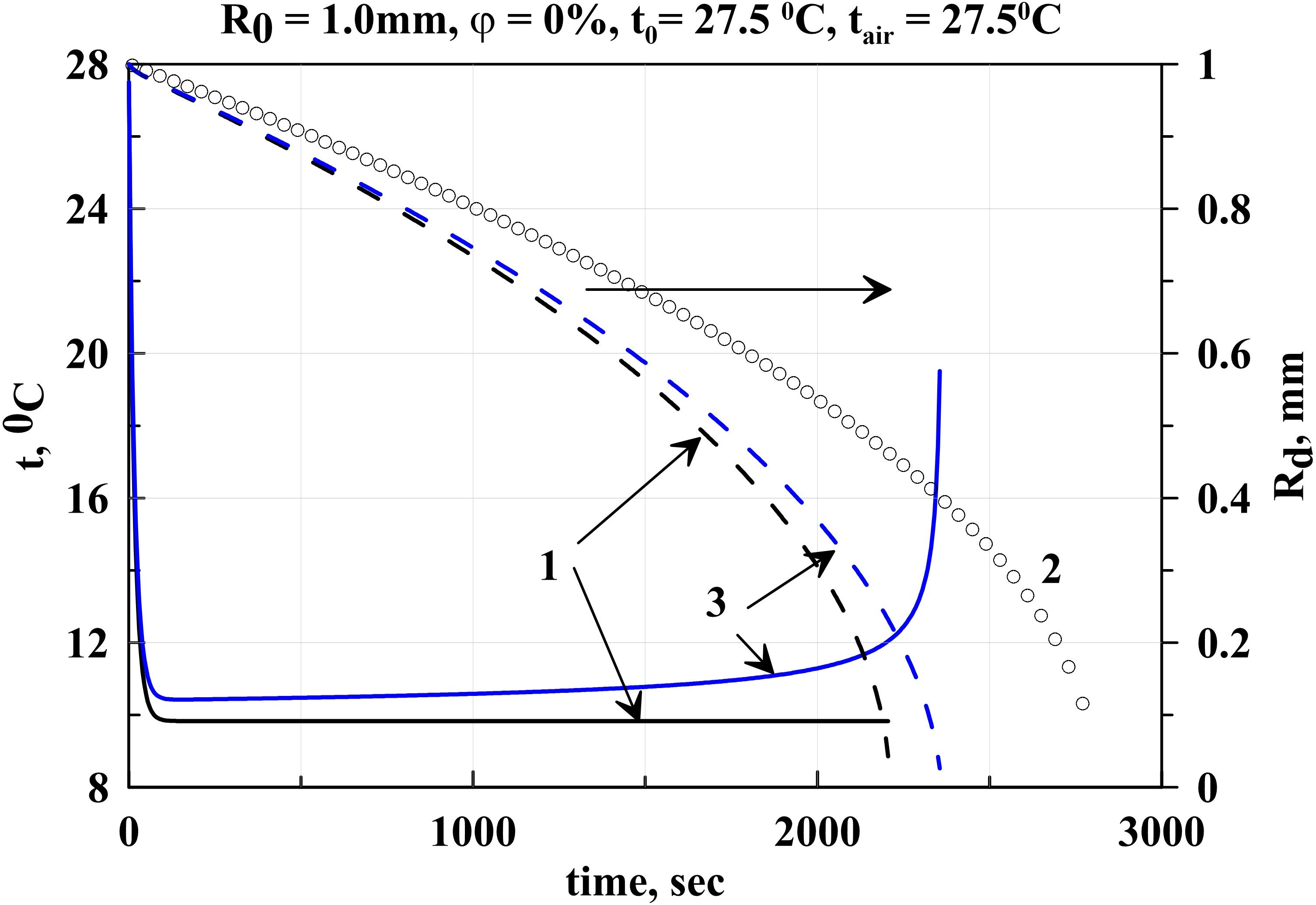 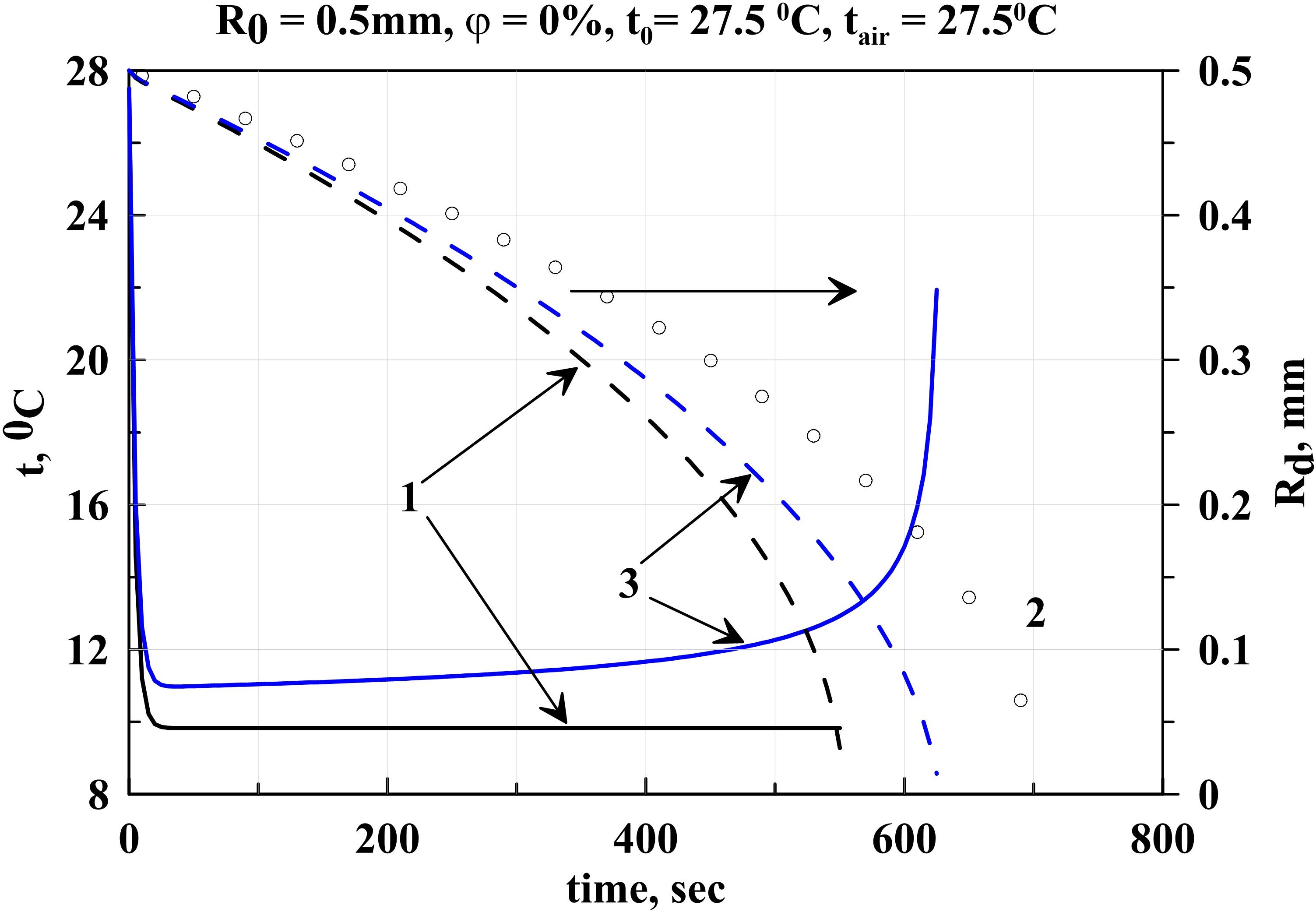 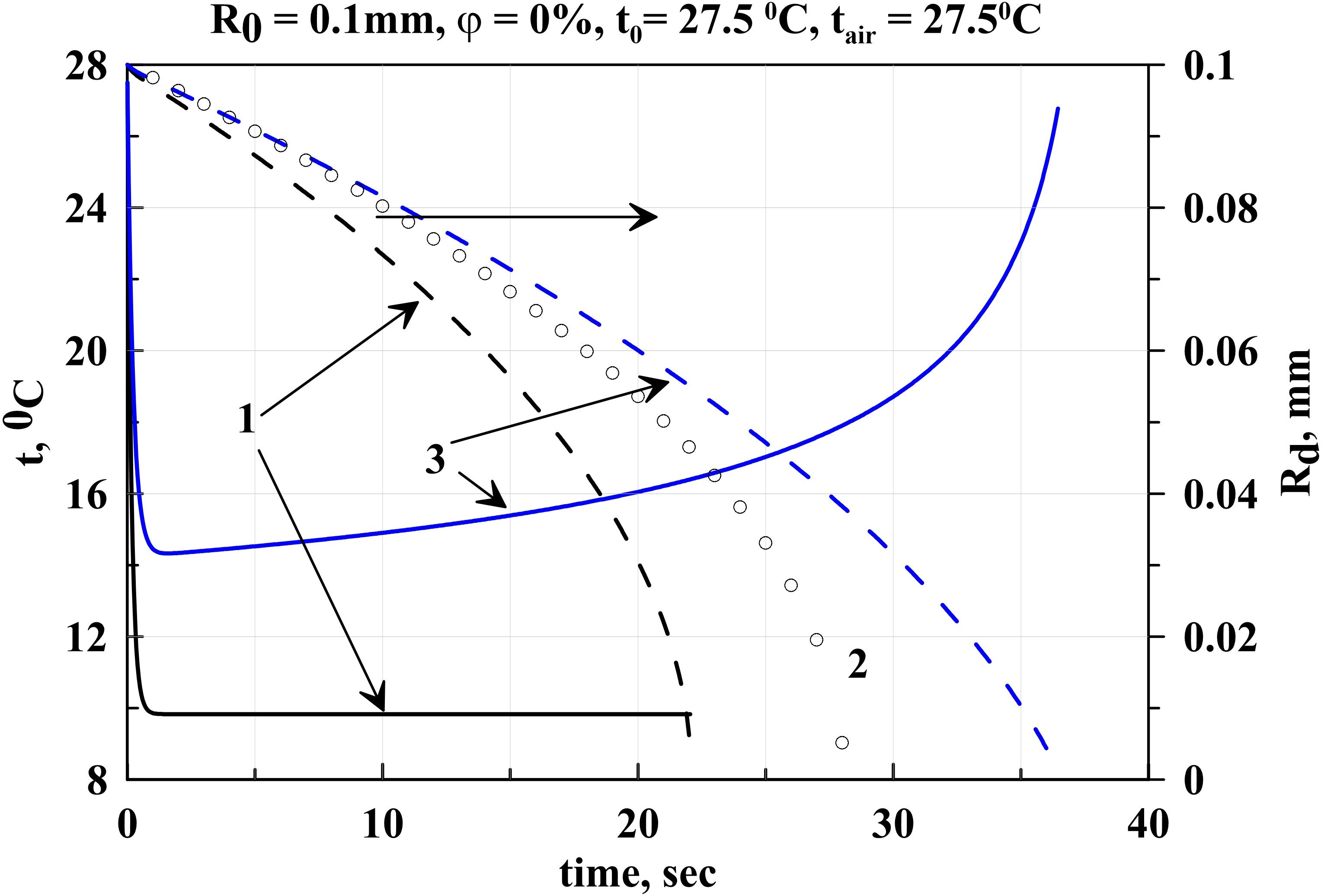 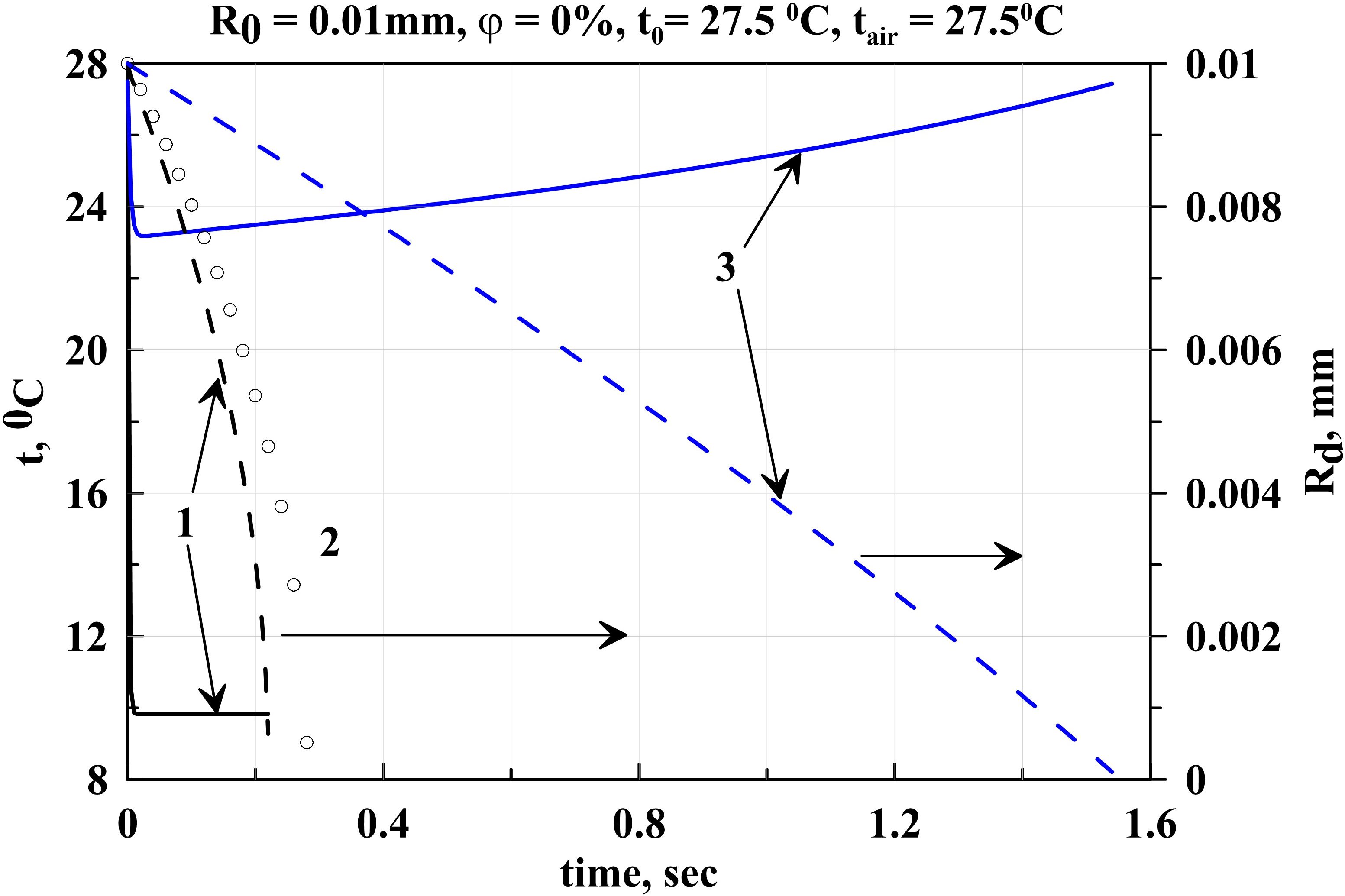 The humidity influence on the time evolution of temperature and the radius are presented in Fig. 7. These results was obtained for the initial droplet radius of \(R_0=\) 0.5 mm. It can be seen that an increase in relative humidity leads to an increase in the lifetime of a droplet. The wet bulble temperatures, \(t_S\), for each humidity value are also shown in Fig. 7. 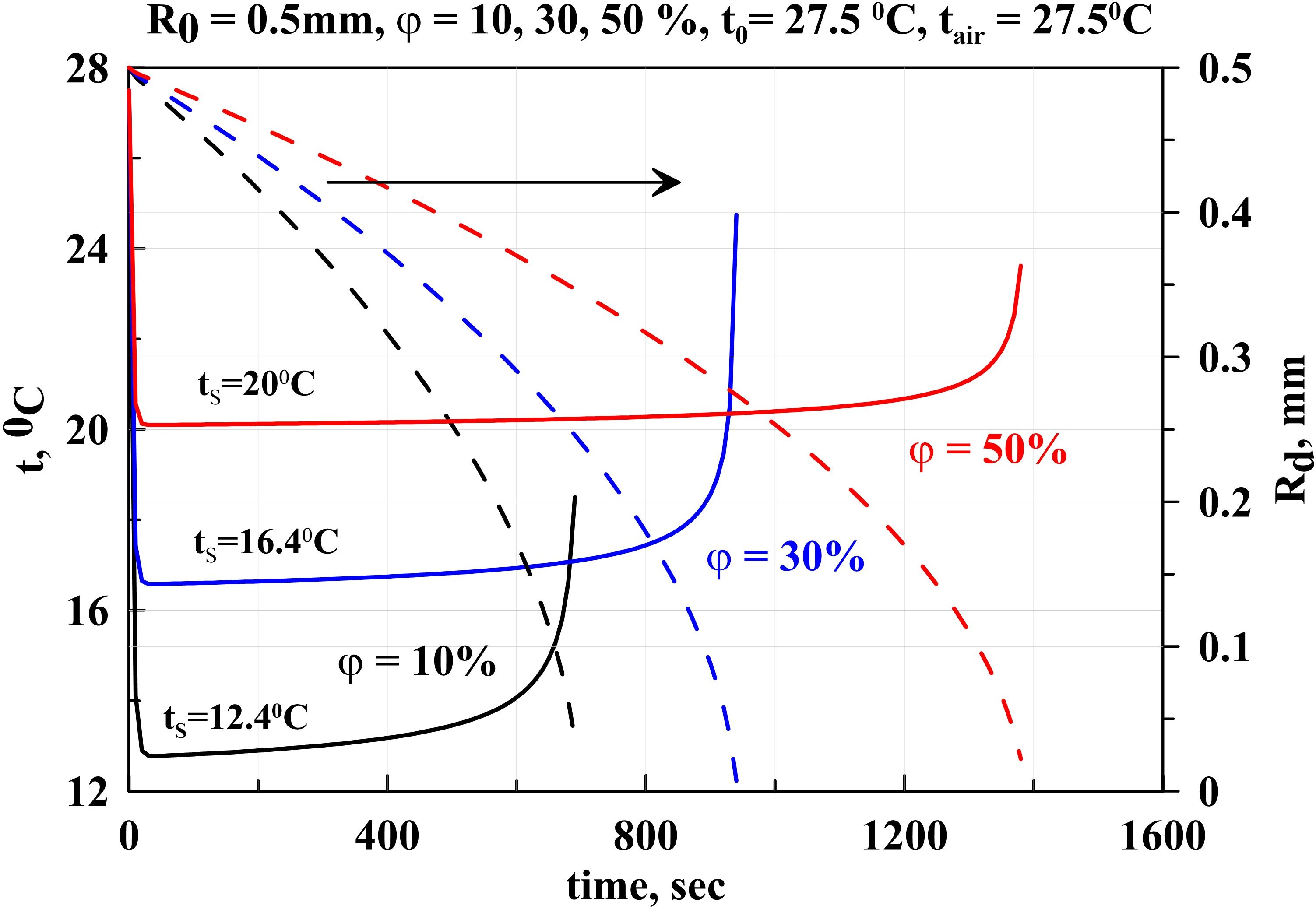 Figure 7. Air humidity influence on the time evolution of temperature and radius

It is interesting to note that, for large droplets (1.0 mm), the use of Eq. (3) leads to an overestimation of the droplet lifetime compared to the simplified kinetic approach. At the same time, with a decrease in the initial radius of drops, Eq. (3) gives a shorter time.

Figure 8 shows the dependence of the relative time \((\tau_3-\tau_2)/\tau_3\) for different initial drop sizes and different relative humidity values: \(\varphi_\infty =\) 0, 10, 30, and 50% [where \(\tau_3\) and \(\tau_2\) are the lifetime calculated by the simplified diffusion approach and Eq. (3), respectively]. It can be seen from Fig. 8 that, for the considered set of parameters it is possible to determine the only initial droplet radius at which the results of the simplified kinetic approach coincide with the data (4). (In Fig. 8 this radius is denoted as \(R_{cr}\)). It can also be seen from Fig. 8 that, for the case when \(R_0<R_{cr}\), the error in determining the lifetime of the drop rapidly increases with decreasing size and can reach 80%. At the same time, for drops whose sizes satisfy the condition \(R_0>R_{cr}\), the error does not exceed 20%. It is interesting to noted that the critical radius value does not depend practically from relative humidity and for values \(\varphi_\infty =\) 10, 30, and 50% (see Fig. 8) amounts to \(R_{cr} \approx\) 0.27 mm. 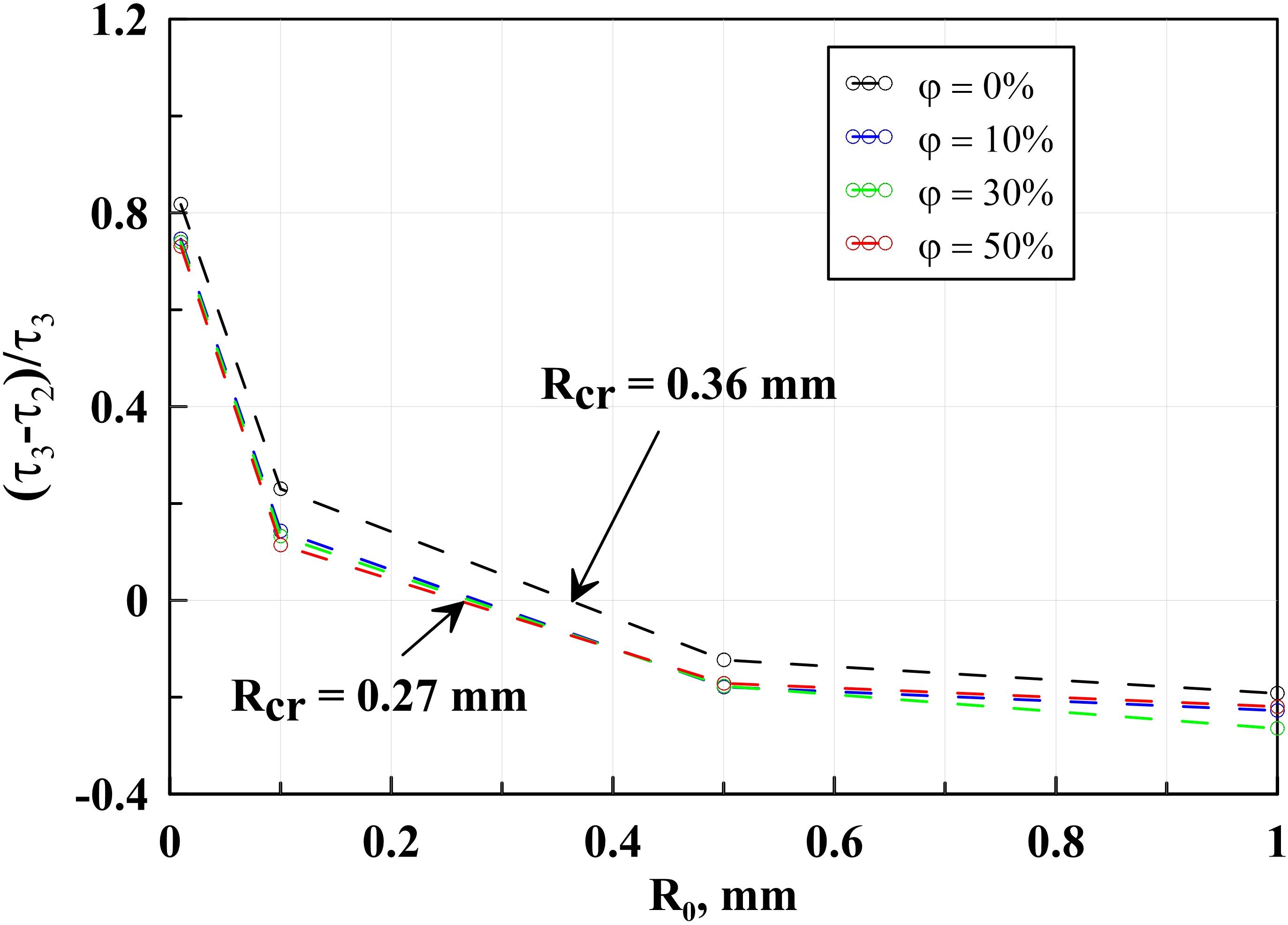 The results presented Figs. 7 and 8 were obtained on the basis of a simplified kinetic approach as well as on the basis of expressions (3) and (4). The simplified kinetic approach takes into account the presence of the Knudsen layer as well as the presence of a certain amount of noncondensable gases in this layer. Note that in (3) and (4), the humidity of the air far from the evaporating drop is not explicitly present. Accounting for this value is carried out by setting the temperature of the wet thermometer \(T_S\), which can be determined from the Ramsin–Mollier diagram.

Levashov, V.Y., Kryukov, A.P., and Shishkova, I.N. (2018b) Influence of the Noncondensable Component on the Characteristics of Temperature Change and the Intensity of Water Droplet Evaporation, Int. J Heat Mass Transf., 127: 115–122.